This magical adventure cruises for eight days from Porec to Dubrovnik and will bring you through some of the best of Croatia and beyond. Sail on a luxurious small ship for an intimate, authentic experience that will bring you to explore popular cities like Split and Dubrovnik as well as lesser-known treasures like Rovinj and Pula, along with island gems and magnificent national parks. Along the way you’ll be able to take advantage of swim stops for refreshing dips in the Adriatic Sea, sample lots of delicious traditional and modern food and drink (including fine local wines) and discover some of the most fascinating history on the planet. Your ship will be waiting at Poreč Port where you’ll be able to embark at 2pm on. Drop off your luggage and explore this summer resort town on the Istrian Peninsula or simply relax in your cabin and enjoy the facilities on the ship. In the evening, a Welcome Cocktail Reception will be hosted followed by dinner, where you’ll be introduced to the captain and crew as well as get to know your fellow passengers. Our cruising begins by sailing along the spectacular Istrian Peninsula, with the first stop romantic Rovinj. Take a walk through your guide to discover this primarily Venetian Old Town known for attracting artists from around the world. Built with limestone that sparkles in the sun, you’ll stroll the narrow cobblestone streets that lead to the foot of the beautiful baroque-style Church of St. Euphemia. Afterward we’ll sail to what was once the private summer residence of President Marshal Josip Broz Tito. Especially scenic, it offers impressive heritage, flora and fauna. Our next stop is one of the most spectacular cities in Istria, Pula. An important provincial center toward the end of the Roman Empire era, it boasts the most well-preserved Roman ruins anywhere other than Italy. Learn about its history on a walking guided tour of the Roman amphitheater, constructed from 27 BC to 68 AD. It’s the only one in the world you’ll that still has a complete circle wall. Enjoy the remainder of your day exploring enticing Pula on your own. This morning we sail to the baroque Venetian fishing village of Mali Lošinj, so pretty it looks like a postcard with its fragrant pine trees and wonderful fresh air known to soothe body and soul. Look forward to a swim stop, enjoying the sparkling blue waters of the Adriatic as we head north to Zadar while feasting on a delicious dinner onboard. 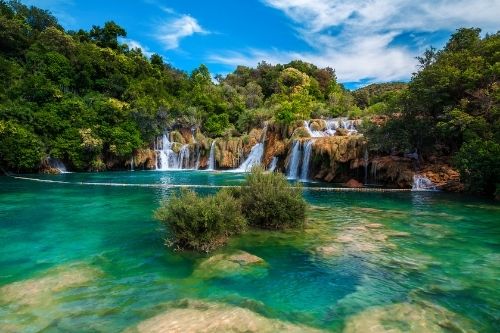 Look forward to an inspiring guided tour through the Venetian city of Zadar with its peaceful streets made of marble. In the compact, pedestrian historical center, you’ll be able to gaze up at the 16th-century walls, built to defend the city from invading Turks. Marvel at the soaring Romanesque Zadar Cathedral, Dalmatia’s largest, along with the 16th-century Port Gate with its Venetian lion still guarding the entrance to the Old Town today. The Roman Forum, Square of the Five Wells and Church of St. Donat are all on the agenda too. Relax on the ship as we cruise on to Vodice to take a trip through Krka National Park, famous for its waterfalls. Tonight, we’ll anchor in Primošten, and you’ll have time to explore it on your own. 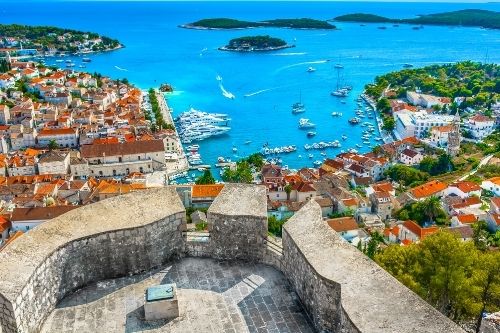 Upon arrival into gorgeous Split, you’ll be led on a truly unforgettable tour through the 4th-century Roman Emperor Diocletian’s Palace. Covering nearly half the historic inner city, this UNESCO-protected site is filled with the city’s impressive Roman heritage, containing some of the most valuable surviving buildings from the Roman era on the Adriatic coast. Back on board, we journey to the popular island of Hvar. This long, sunny island is especially popular among jetsetters, including celebrities. But behind the glamour, there’s lots of history and grand architecture to discover. Take a walking tour to see and learn more about its most alluring, like Europe’s oldest public theater, dating back to the early 17th-century. You’ll have time to explore on your own, checking out the restaurants, cafes and shops housed in Venetian buildings that line the maze of backstreets. 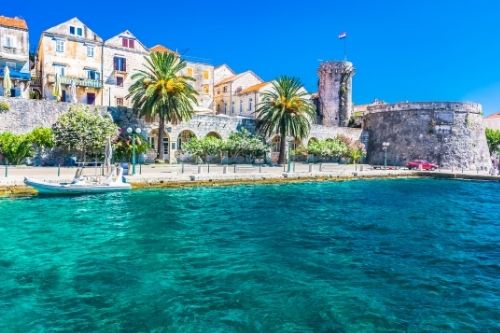 The charming island of Korcula is on our itinerary next – often referred to as a mini-Dubrovnik with its magical fortified Old Town. The birthplace of intrepid explorer Marco Polo, you’ll see lots of traces of its Venetian past. Take a walking tour with your knowledge guide through this fairytale like place with its cobbled streets and alleyways, standing in front of the stunning Cathedral of St. Park as you learn more about its history. Afterward we cruise to lush Mljet with its dense forest and saltwater lakes is a nature lover’s delight. We’ll anchor here, enjoying the Captain’s Dinner with live music tonight. 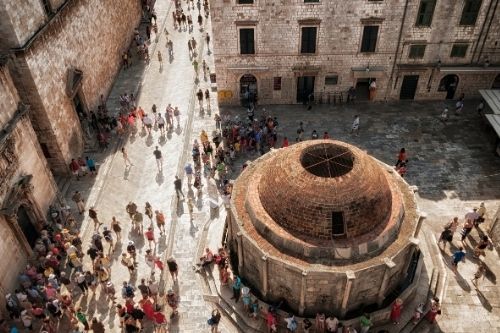 A highlight for many, the UNESCO World Heritage site of Dubrovnik is our final stop. Look forward to a walking tour of this ‘Pearl of the Adriatic,’ visiting majestic places like Rector’s Palace and the Franciscan Monastery’s Pharmacy. You’ll have the remainder of the day to explore, perhaps walking atop the ancient walls, which provides a fabulous view of the Old Town and the island-dotted Adriatic. Tonight, you’ll have the chance to say you goodbyes and perhaps exchange contact information with fellow passengers, now new friends, in one of the local restaurants. 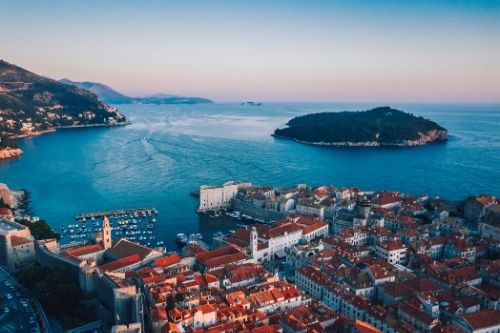 With departure day here, after breakfast you’ll be taken by private transfer to the airport or your hotel in Dubrovnik – we hope to see you again soon. This superior 161-foot-long and 26-foot wide vessel was designed to reach those smaller, out of the way ports, providing a more intimate cruise with the ability to reach more of Croatia’s highlights. With a maximum of 36 guests, every passenger is made to feel like VIP. The ship features well-equipped, spacious cabins and common areas with amenities like an expansive sun deck with loungers for all, and a swimming platform for rejuvenating dips in the Adriatic.