Best places to visit in Croatia

Croatia is a country of historic architecture and medieval towns, days full of sunshine and warm weather, and natural attractions and stunning coastlines. It is a country that is on so many bucket lists, and rightly so. Situated along the Balkan Peninsula, Croatia shares its borders with five other south-eastern European countries to the east, and the glistening Adriatic Sea to the west.

Croatia’s capital and largest city, Zagreb, is located in the north-western part of the country. Today, the city is a cosmopolitan haven today, with independent bars, cafes and universities lining the streets, but go back almost 2,000 years and the city was a medieval landscape. Towers, palaces and detailed churches stood tall.

Across all cities in Croatia, there is a beautiful contrast between the old and the new: cobbled streets, unique architecture and traditional markets, versus the vibrancy of the modern metropolis. It’s one of the things that makes Croatia so attractive. In fact, it’s been titled Europe’s fastest-rising holiday destination for multiple years running.

There are also many destinations, cities and national parks to consider visiting during your trip to Croatia. Cities like Zagreb, Zadar, Split and Dubrovnik are all larger destinations that offer sight-seeing experiences centered around literature, history, science and art. These cities are the epitome of old versus new. We have included six of Croatia’s best places to visit – a blend of cities, national parks and up-and-coming cosmopolitan wonders. 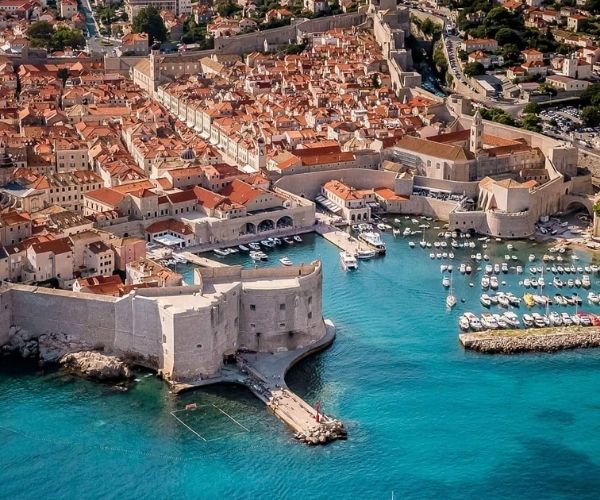 Located right in the south of Croatia and home to the some of the most historic and magnificent buildings, Dubrovnik is definitely one of the most visited cities in the country. Direct flights from London to Dubrovnik make it a feasible entry point into Croatia and a good place to start your trip. Flying over the city, you will see a unique view – thousands of orange rooftops enclosed by an impressive defensive wall. These medieval walls, which stand at a height of 25 meters tall in some places, encapsulate the history of Croatia.

The ‘walls of the city’ were built during the 13th century and although there have been reinforcements put in place along some parts, the walls have generally stayed exceptionally strong and dominant. With such a unique landscape, Dubrovnik’s walls and medieval streets have been the backdrop to many Hollywood films and TV series – the most recognized being Game of Thrones (2011-2019).

Although Dubrovnik’s architecture is definitely one of the highlights (especially walking the city walls and participating on a Game of Thrones tour), it does not define the city. There are many other beautiful views, attractions and hidden gems in Dubrovnik to set your sights on. These include visiting palm-fringed islands (e.g. Lokrum Island), drinking local beer at the cliff bars and riding the cablecar up Mount Srd – offering views of the glistening ocean. 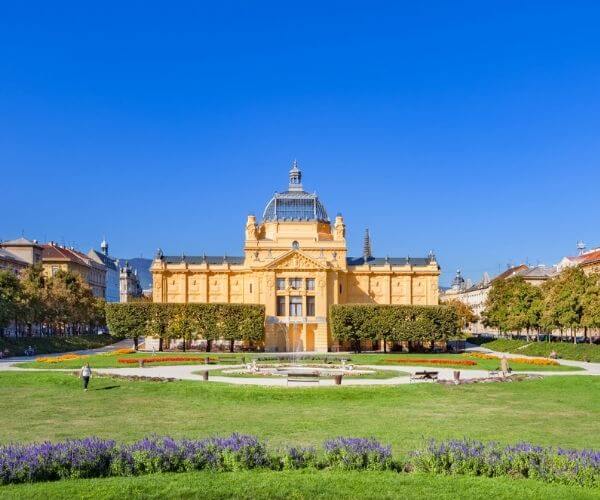 Situated in the north of Croatia is the country’s capital and largest city, Zagreb. This is one of the cities that travelers can fly into to begin their Croatia trip and, with direct flights from London to Zagreb on a daily basis, it makes it an attractive destination. The city itself has a strong architectural presence – with Austro-Hungarian buildings, iconic landmarks, and impressive cathedrals standing tall, offering mesmorizing backdrops as you walk through the city.

The city definitely deserves a few days to explore, especially if you are interested in historic architecture. Landmarks to see include Lotrscak Tower, the Archaeological Museum, Mirogoj Cemetery, St. Mark’s Church and most famously, the Zagreb Cathedral. Although the cathedral has had many restoration projects and changes to it, for a building that was built in 1217, it is still as impressive. The cathedral has Gothic features both in the interior and exterior, and its observation tower is a good opportunity for travelers to see Zagreb from a different viewpoint. 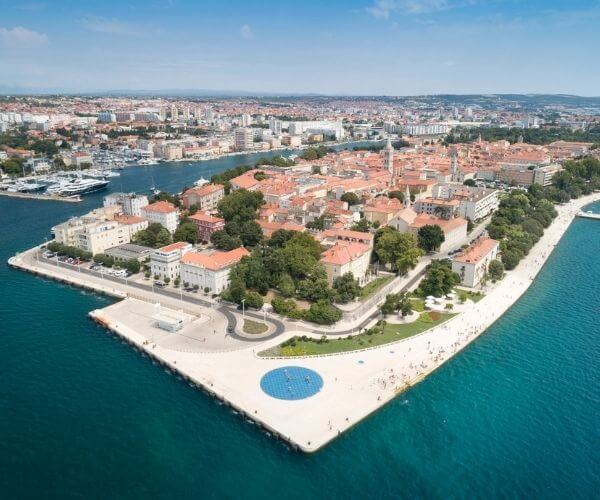 Arguably Zadar is one of the lesser-known and traveled cities, but it is definitely becoming an up-and-coming destination. Located in the west of the country on Croatia’s Dalmatian Coast, this small, historic port offers romantic landscapes and cobbled streets, without the crowds. This small city offers hidden gems at every corner, especially when it comes to places to eat. Owner-run restaurants with freshly caught fish offer delicious and intimate dining experiences.

Zadar is a great base for other hidden and remote destinations. Inland, you have good access to three of Croatia’s national parks – Paklenica, Plitvice Lakes and Krka. Heading out onto the water, you can sail to palm-fringed islands and tropical beaches. For those interested in dance music and a buzzing nightlife, head to the island of Pag – the home of dance-enthusiasts Hideout Festival. 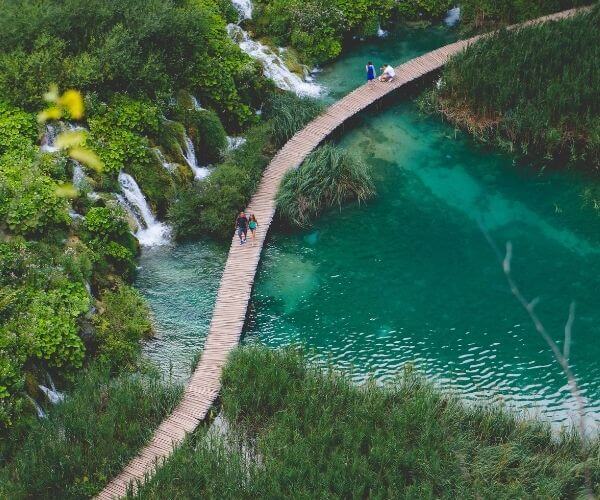 Croatia also homes some of the most beautiful natural wonders and landscapes across all of Europe. The Adriatic Sea separates the Italian Peninsula from the Balkans and, with crystal clear waters and warm temperatures, it is regarded one of the nicest seas in the world. Sakarun beach, Nugal Beach, Stiniva Beach and Dubrovnik Beach among many others, offer sandy shores, hidden coves and azure waters. Further in land, national parks like Plitvice offer a little piece of paradise for those looking for colourful landscapes and jaw-dropping waterfalls.

Plitvice National Park is a truly spectacular destination – a UNESO-listed park with a combination of lush green forests, vibrant lakes and a collection of 16 glistening lakes. The park is accessible from either Zagreb or Split and can be enjoyed as a day trip – perfect for those looking for a natural paradise to contrast with Croatia’s cities. Plitvice is larger than other national parks in Croatia (such as Krka) so you can easily spend a full day here, walking and enjoying the natural landscape. 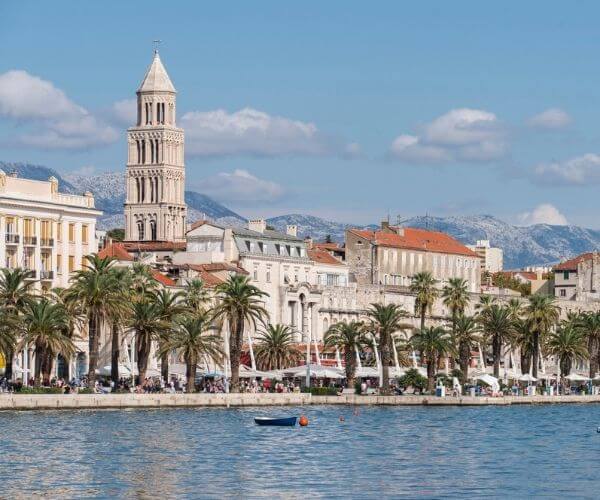 Situated on the south-western coast of Croatia is the second-largest city, Split. A common question for those looking to travel to Croatia is “which is better: Split or Dubrovnik?” They both have similarities: sparkling waters, restaurants plating up freshly-caught fish and seafood, medieval and Roman architecture and of course, warm sunshine year round. Split is usually an entry point when it comes to international flights, and as it is located in the center of the country, it works well for day trips and sight-seeing.

Architecture in Split is a blend of the old and the new – the epitome of Croatia. Gothic and Renaissance architecture in Split is often contrasted against coastal bars, restaurants and modern structures like the Poljud football stadium. For history buffs, the Roman Emperor palace hosts winding alleyways and walkways and each corner you turn, an ancient structure is on display. 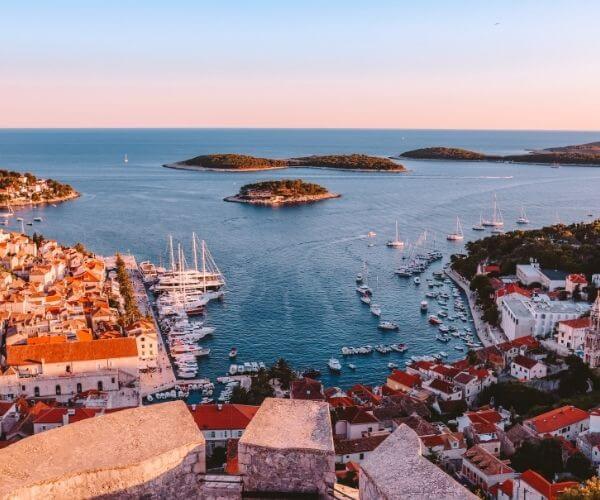 Hvar is regarded one of the most beautiful island destinations in Croatia. Out on the water, the harbour is full of expensive mega-yachts, A-list celebrity sightings and hidden caves. On land, the landscapes vary from lavender fields, vibrant vineyards, old historical towns and a vast countryside.

Croatia is lucky to border the glistening waters of the Adriatic Sea and, with many archipelagos accessible from the main land (via boat or cruise), it makes Croatia one of the best European destinations on the water. Some most-loved islands include Vis, Brac, Rab, Losinj, Solta and Sipan, among many others.

Ready to plan your Croatian cruise?

Yes, then get in touch today and our cruise experts will design you a unique itinerary based on your desires, plus all our insider trips to make sure your Croatian cruise is truly amazing