Spend four days island-hopping along the spectacular Dalmatian coast on a private Croatia yacht tour, discovering enchanting highlights like the famous Blue Lagoon, a tropical paradise with transparent turquoise waters and a sandy seabed that makes for dreamy swims. Visit one of the most photographed beaches in all of Europe, Croatia’s oldest settlement of Stari Grad on Hvar where you’ll join a wine tasting and walking tour, witness the magical Blue Cave and the charms of unspoiled Vis. 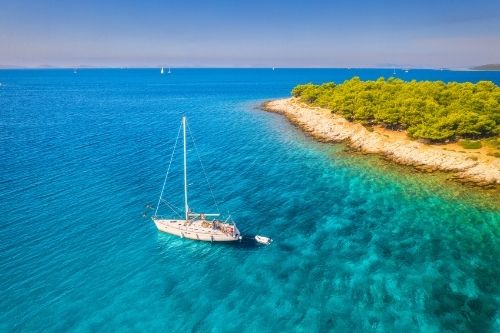 Our private driver will pick you up from your hotel in Split or from the airport and transfer you to the marina to board your vessel in Sibenik. Early arrivals can enjoy exploring this enchanting walled town with a history that dates back over a thousand years. It’s home to the Gothic-Renaissance St. James Cathedral, one of the region’s largest. After hopping on board your sleek vessel, sail toward Solta Island making a stop for a swim at the famous Blue Lagoon before continuing to your final destination, overnighting in the village of Milna on Brac. 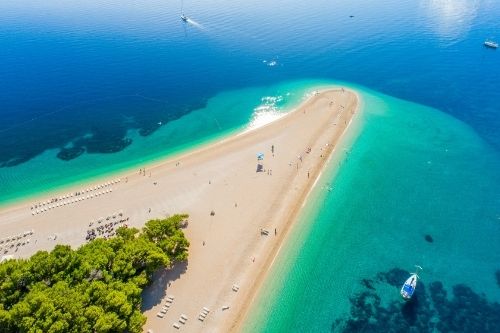 Sail to Zlatni Rat, one of Europe’s most beautiful beaches nearly surrounded by crystal-clear aquamarine waters that are ideal for a swim. Afterwards, continue to Stari Grad, the oldest settlement in Croatia, where you’ll be met by your local guide for wine tasting and a tour of Hvar Town. Enjoy touring and tasting at a highly sought-after family-run winery in charming Jelsa and then follow your guide for a walking tour of the historic landmarks in Hvar Town. This evening sample the delicious eats in one of the many outstanding restaurants and cafes that offer alfresco dining with a view before overnighting in Palmizana.

Cruise through the Pakleni Islands, a tranquil string of jewels just off the southwest coast of Hvar, heading toward Bisevo Island to visit the famous Blue Cave. You’ll enter in a small vessel to witness Mother Nature’s glory, with the sunlight entering through a crack in the cave’s roof hitting the white limestone sea bottom to create an otherworldly-like blue glow. From there you’ll continue to unspoiled Vis, known for offering the “Mediterranean as it once was,” after being closed off to the public for 40 years while used as a military base. You’ll spend the night on the catamaran in Komiza. It’s time to start your return to Sibenik. With a six-hour sail ahead, you’ll leave in the morning to arrive after lunch. From there, you’ll take private transfer to Spit where you might want to plan on spending at least a day or two before heading back to the airport. Here you can explore the 4th-century Roman Emperor Diocletian’s Palace, a maze-like complex with some of the most well-preserved Roman architecture in the world. It Our lagoon 450F catamaran is ideal for families or up to 6 friends looking to explore the beautiful Dalmatian coast in comfort. The private yacht charter is fully air-conditioned and has 3 double cabins, each of which has its own en-suite shower room with electric toilets. The catamaran is very spacious with dining areas inside the vessel and an outdoor dining area to the rear. The boat is equipped with a professional skipper and onboard hostess.

Yes, then get in touch today and our Croatia yacht experts will help create you a unique itinerary based on your desires, plus all our insider tips to make sure your Croatian sailing trip is truly amazing